Matches of Magic are won and lost by your ability to read your opponent’s soul, figure out what it is planning and what cards it has, then plan and execute a beautiful, multi-turn strategy that completely annihilates that stupid soul once and for all.

However, precision of execution and a keen understanding of the rules will crush beautiful strategy every time. Here are 10 ways that you can also use the mighty power of exactitude to destroy all who stand against you. These tactics are also guaranteed to reduce the number of times you find yourself lying in a gutter at 0 life thinking “I didn’t know you could do that.”

Prey Upon is vulnerable to getting blown out by a counter-trick. Somberwald Stag is not. Let’s see why.

You cast Prey Upon, targeting your 3/3 Inspiring Captain and your opponent’s 2/3 Bygone Bishop. You hope that this will kill their Bishop and leave your Captain alive. Your opponent casts Strength of Arms, giving their Bishop +2/+2 and making it a 4/5. Now your Prey Upon resolves, and the 4/5 Priest kills your 3/3 Captain and survives. Your have 2-for-1ed yourself and are probably screwed.

Now consider the Stag. You cast a 4/3 Somberwald Stag. It enters the battlefield, and you target your opponent’s 2/3 Bygone Bishop with its trigger. Your opponent again casts Strength of Arms, and their Bishop again becomes a 4/5. However, the Stag’s ability reads “you may have it fight”, and whilst you choose the target when the ability goes on the stack, you only decide whether the fight actually happens when the ability resolves. You can therefore simply chose to not actually fight the Bishop. The Bishop survives, but so does your Stag.

If the Stag’s ability was worded something like “When Somberwald Stag enters the battlefield, you may choose target creature. Somberwald Stag fights that creature,” then you would not be able to jack out after the Strength of Arms is cast.

SUMMARY: pay close attention to how abilities involving “you may” are worded, and understand exactly when you are allowed to make the decision.

THINK ABOUT THIS WHEN: you are playing cards with “you may” clauses where you might want to change your mind

Responding to Enter The Battlefield triggers

You have a 6/6 Kessig Direswine and a 3/3 Inspiring Captain that has been enchanted with Bound by Moonsilver. You have a Galvanic Bombardment in your hand. Your opponent has no creatures and 1 card in their hand. It is during their first main phase. 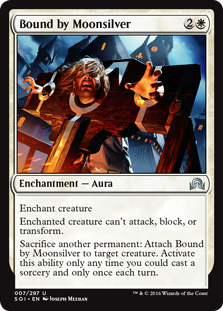 They want to be able to cast a crappy creature, then sacrifice it to move the Bound by Moonsilver from your Captain to your Direswine. You want to force them to sacrifice a land if they want to move it.

If they cast a creature without an enter the battlefield trigger, then you can’t stop them from sacrificing it to move the Bound by Moonsilver. Once the creature resolves, the stack will be empty and your opponent will have priority. They can then sacrifice the creature as planned.

However, if they cast, for example, a Topplegeist, then when it resolves its enter the battlefield ability will trigger. 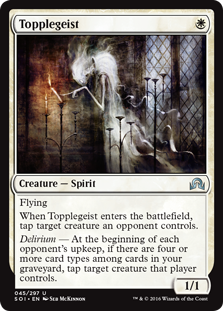 Your opponent will still have priority, but this time the stack will not be empty and they will not be able to use Bound by Moonsilver, since it is not a time at which they can cast a sorcery. If they pass priority then you can cast Galvanic Bombardment on the now-resolved Topplegeist, killing it before your opponent has a chance to sacrifice it.

THINK ABOUT THIS WHEN: your opponent is playing cards with abilities that can only be played anytime they could cast a sorcery

You have a 6/6 Kessig Direwsine, and your opponent has 3 1/1 devil tokens that each deal 1 damage to a creature or player when they die. 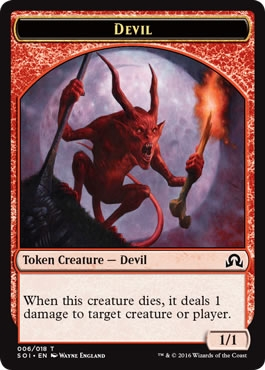 You attack with your Direswine. Your opponent triple-blocks with all 3 devils. Their plan is for all 3 devils to die, then for each devil to deal 1 damage to your Direswine as it dies. This will be exactly enough to kill it, which would be a shame for you.

Once again, the key word here is “may”. Usually you will assign blockers the minimum amount of damage required to kill them so that you can kill the other blockers as well. However, in this scenario you can instead choose to assign 3 damage to devil #1, 3 damage to devil #2, and then 0 damage to devil #3. Devils #1 and #2 will die, but devil #3 will live. The devils can therefore only deal a total of 5 damage to your Direswine, and it will survive.

SUMMARY: consider your options when assigning combat damage, especially when dealing with creatures with death triggers

THINK ABOUT THIS WHEN: your opponent multi-blocks with a creature with an on-death trigger, and you don’t want to kill it

You have a Blood Mist and a Bloodmad Vampire. Your opponent has nothing. 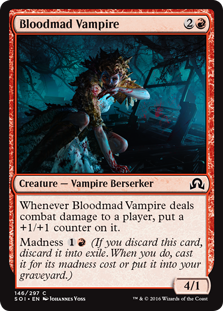 You move to combat, using Blood Mist to give your Vampire double-strike, and attack with your Vampire. During the first-strike damage step, your 4/1 Vampire will deal 4 first-strike damage to your opponent, triggering its ability and giving it a +1/+1 counter. It is now a 5/2. During the normal damage step it will deal 5 damage to your opponent, triggering its ability again and giving it another +1/+1 counter. You end combat with a 6/3 Bloodmad Vampire that has dealt 9 damage. If you weren’t paying attention you might have only called the trigger once, instead ending combat with a 5/2 Vampire that has only dealt 8 damage.

THINK ABOUT THIS WHEN: you have a creature with double-strike

You have a Wildfield Scarecrow that you intend to sacrifice at the end of your opponent’s turn. Your opponent has a Faithbearer Paladin. 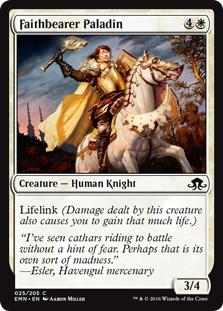 They attack with their Paladin, and you block. You sacrifice the Scarecrow before damage is dealt, and during the damage step the lifelink-ing Paladin finds that there is no longer anything there for it to deal damage to. Because the Paladin deals 0 damage, your opponent gains 0 life.

SUMMARY: creatures with lifelink don’t gain their controller any life if there is nothing for them to damage

THINK ABOUT THIS WHEN: you have a creature with sacrifice abilities, and your opponent benefits from it being alive

You have a first-striking Thalia, Heretic Cathar. They have a deathtouch-ing Rancid Rats. You don’t need to worry about their Rats killing your Thalia if you attack. She will deal her first strike damage, the Rats will die, and they won’t be around to use their deathtouch during normal damage. Thalia will live. 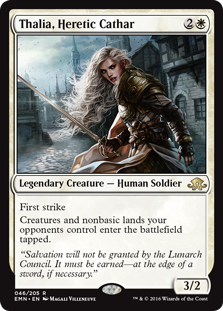 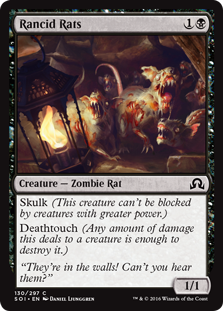 How to talk during the combat step

The combat phase is the most interactive part of Magic, and you should take care not to reveal your intentions to your opponent before you have to. There are multiple steps at which you can play your spells and use your abilities:

Often there will be no spells cast in any of these steps, and combat will be a simple battle of power and toughness. But you should be sure to move through each step methodically, and to not speed ahead to the next step and reveal your plans prematurely. Make sure you are being clear when you intend to proceed, giving your opponent enough time to stop you if they have some tricks.

A common example is when you want to attack your opponent. The wrong way to do this is:

You: “I’ll attack with everyone.”
Them: “Woah, that sounds terrifying. Before you declare attacks I’ll play Expose Evil and tap down your two biggest creatures.”

You tipped your plan to your opponent, and they were able to use this information to play a defensive spell that they might not have thought to play otherwise. Better is:

The same applies to every other transition. Don’t just unilaterally declare blockers; say “blocks?” and wait for confirmation that this is OK. Or “I’ll block…” and wait a second or two to give your opponent a chance to stop you.

Combat as the attacking player

If the defending player is playing correctly, they will be waiting for you to either do something or pass priority before revealing their own plays (see below). You should therefore be clear when you don’t have any tricks and are passing priority to them. I like saying “No effects”. A perfectly executed combat step might look something like:

Combat as the defending player

When you are the defending player, you get to wait and see what tricks the attacking player has during each phase before having to decide whether you want to play any tricks of your own. This can be a powerful weapon if you use it correctly. Many interactions are lost by the person who blinks first.

Your Accomplice dies and you wasted a Borrowed Malevolence. Much better is to make sure your opponent declares whether or not they want to play any tricks:

You: “I’ll block with the Accomplice.” (((pause)))
Them: “I’ll play Strength of Arms.”
You: “(Guess I’ll save my Borrowed Malevolence then)”

You: “I’ll block with the Accomplice.” (((pause)))
Them: “No effects.”
You: “(They could still have a trick that they didn’t want to play, but probably not) I’ll play Borrowed Malevolence to give my Accomplice +1/+1.”
Them: “OK, my Cultist dies.”

Sometimes they will have been holding back a trick and will blow you out anyway, but you still gave yourself the best chance of success.

SUMMARY: As the defending player, make sure you find out whether your opponent wants to play any spells before playing any of your own.

This is particularly important when you have a removal spell that will kill an attacker before you get to the damage step. It might seem like it doesn’t matter when you play your spell, since their creature is going to die whatever happens. But this can be an excellent opportunity to extract some additional value.

Your opponent is attacking with a Noose Constrictor and has 2 cards in their hand. You have an untapped Ghoulcaller’s Accomplice and a Murder in your hand.

You intend to Murder the Noose Constrictor. Bad:

You: “I’ll Murder your Noose Constrictor.”
Them: “OK, it’s dead”

You: “I’ll block Noose Constrictor with Ghoulcaller’s Accomplice.”
Them: “I’ll discard a Forest to give the Constrictor +1/+1 so it doesn’t die.”
You: “OK, now I’ll Murder your Constrictor.”
Them: “(Dammit, wasted a card for nothing)”

Be careful though. In the above example, if your opponent had had a Woodcutter’s Grit that they could have use to respond to your Murder, you would have wasted your Murder AND your Ghoulcaller’s Accomplice would have died. This would be unfortunate for sure, but not a disaster. On the other hand, if you had been gambling with something more valuable, like a Duskwatch Recruiter, this would be nothing less than a tragedy. 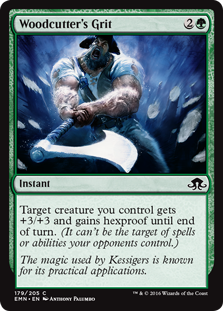 SUMMARY: when you plan on removing an attacker (or blocker), give your opponent as many chances as possible to waste their tricks before pulling the trigger

THINK ABOUT THIS WHEN: you have a way to kill an opponent’s creature during combat and you are pretty sure it is going to work

A “rules lawyer” is someone who knows all the letters of the law but doesn’t care about the spirit. They seize on honest mistakes, spin legal traps and quietly shove you into them when all you wanted to do was somehow get a card from your hand onto the battlefield.

However, there is a world of difference between rules lawyering and simply knowing your rights. None of these tips involve messing with your opponent; you’re just exploring and using the full depth of the game in the ways that its creators intended. I for one am looking forward to the next time I get annihilated by something I didn’t even know was possible.

If you enjoyed this post, then I guarantee you will also enjoy “Another 10 somewhat advanced Magic: The Gathering plays”. And if you have any advanced plays of your own that I’ve missed, let me know!