After I had calmed down and paid for his jacket to be dry-cleaned, Greg was nice enough to explain self-hosting, a technique that really does allow the Coffeescript compiler to be written in Coffeescript. A self-hosting compiler is one that can compile its own source code. I used this information to create Gluby, an asinine new programming language that also has a self-hosted compiler. It is syntactically identical to Ruby, except instead of writing =, you write the actual word EQUALS. You can’t write the actual word EQUALS anywhere else in your program otherwise it will break. This essay explains self-hosting and introduces v0.1 of Gluby. 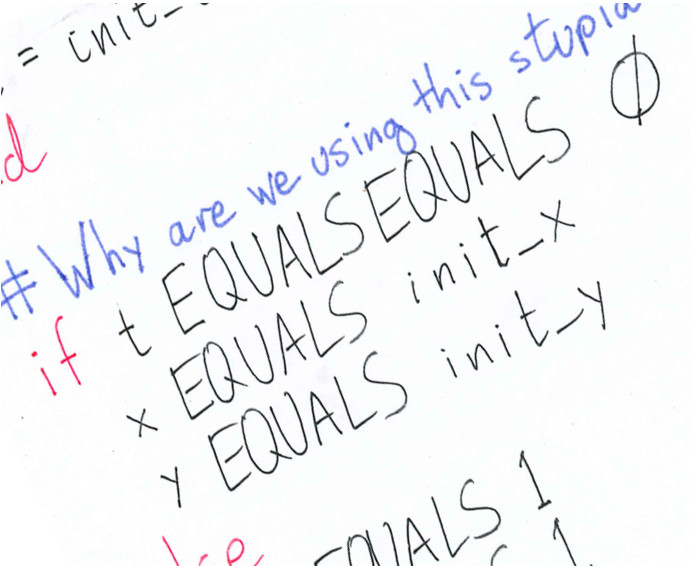 What is a self-hosting compiler?

The process of creating a self-hosting compiler begins with a compiler implementation in a language that already exists. Coffeescript was originally written in Ruby. The Scala v2 compiler is also self-hosting, and its v1 was was written in Java. The first version of your new compiler needs to be able to parse your source files (written in your new language) and turn them into something that your computer can execute.

How I made Gluby self-hosting

v0 of the Gluby compiler is a Python program that reads a .gl file and turns it into a .glc file by replacing all of the instances of the word EQUALS with actual = signs. The programmer can then execute this compiled Gluby file using the Ruby interpreter.

In order for a language to be made self-hosting, it must first be capable of actually writing compilers. It will probably need to be able to build and manipulate abstract syntax trees, which is by no means straightforward. Gluby sidesteps this issue via wholesale theft all of Ruby’s features and syntax, but since Coffeescript was developing an entirely new syntax it had to build out its functionality the hard way and actually re-implement things like classes, loops and if-statements.

Once a language has been made sufficiently powerful, you simply use it to reimplement its compiler. This compiler is no different to any other program that the language may have been used for. It takes input and produces output, and it just so happens that the input is a source file for that very language, and the output is something that a computer can run.

Here’s the initial v0 implementation of the Gluby compiler that I used to bootstrap the language. It is written in Python.

Here’s v1 of the Gluby compiler. It’s written in Gluby v0, which, remember, is Ruby except you write the actual word EQUALS instead of using the symbol.