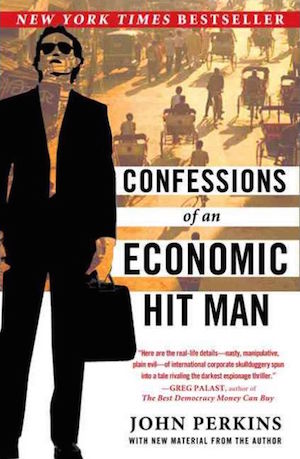 Confessions of an Economic Hitman is a book about the author’s enormous, gargantuan, monumental flaws and the roiling turmoil he went through in coming to terms with them. It is a book about the economic cyanide force-fed to the developing word by the US government, the IMF and the rest of what author John Perkins calls “the corporatocracy”. Perkins describes how he personally used to encourage developing countries to accept enormous loans in order to pay US companies to overhaul their infrastructure. Deliberately over-enthusiastic economic forecasts from companies like Chas T. Main, Perkins’s former employer, make the deals look like once in a lifetime opportunities. However, the promised benefits never materialize. The countries are inevitably unable to repay their loans, at which point the lenders (typically the IMF, US government or US banks) kindly offer to renegotiate terms in exchange for neoliberal reform and a Sword of Damocles. The rulers of these countries typically become rich, whilst their country is ruined.

I am very prepared to believe in the existence of a global order as described by Perkins. His claims line up well with those made in books like David Harvey’s A Brief History of Neoliberalism, and you don’t have to scrape away very much realpolitik from the current status quo before you get to some bona fide bullshit. However, I am much less credulous when it comes to his personal part in it. Perkins is embarrassingly focussed on convincing the reader that he is really cool. Much of this amounts to something one might call “shithead-bragging” - yes I was a total shithead, but I was really, really good at it. Jordan Belfort (the “Wolf of Wall Street”) showed that given enough charisma and tut-tut-able excess this can still make for a great story. But Perkins instead comes across as an mid-sized cog desperate to convince you that in actuality he was one of the most incredible cogs that the machine had ever seen.

He never misses an opportunity to emphasize his relative youthfulness. We are never allowed to forget how much time he spent studying the cultures of the countries he was destroying. He boasts about strangely minor things, like how much space an op-ed piece he wrote in a local newspaper was given and how his company won an award from TIME magazine for being “one of thirteen organizations whose Web sites best reflect the ideals and goals of Earth Day”. These would all be absolutely reasonable things to talk about if they had any impact on the story he was telling, but they don’t. No one else seemed to care about his age, and nothing ever came from the minor magazine award. He claims to have been “on track to the rarefied heights of millionaire by age 40”. This would be somewhere between four and six million in today’s dollars. To be sure, this is an incredible sum of money for anyone to ever make, but he talks of yachts and beautiful women as though he were part of the glitterati rather than an above-average consultant.

And the women are always “beautiful”. The methods used by the corporotacracy are always “subtle”. They are always described with these exact words. I have no doubt that they are accurate descriptions of their subjects, but together with phrases like “I felt a depressing sense of sadness” they make the reader long for a good ghostwriter to bring some more life to what could have been a much more compelling story and central character. If the book were written in the third person, and if John Perkins was one of several characters who weaved in and out of view, then we could build up an evolving picture of his hopes and his flaws gradually and over time. However, we are forever stuck inside his head, being beaten over the head with the blunt instrument of mea culpa.

Any autobiographer is an inherently unreliable narrator. Anyone spending a hundred thousand words or so describing their life has an angle to push and no one to contradict them. But Perkins feels so unreliable that I started to automatically question parts of his story. He quotes passages from his journal, showing us that he really was as tormented as he claims he was. All I could think was that making up and backdating journal entries would be a fantastic way to prove your past good intentions. He quotes the dedication from Graham Greene’s Getting To Know The General, with the heavy implication that he himself is one of “the friends of my friend” that Greene refers to, and my immediate reaction was to go in search of evidence that this was not the case. Any time he claimed that another person admired, respected or acted in any way that appeared to reflect well on him I felt I had no choice but to assume it was at least partially exaggerated.

Perkins wants us to understand how much more perceptive and open-eyed he was than the majority of his colleagues, how much more time he spent thinking about the damage wrought by their actions, and how much better he was at doing this damage. There is a lot of inconsistency within this persona that he constructs for himself. There is a particularly oblivious page where he sadly notes that “it had now become painfully clear that my days of innocence were gone”, a good twenty pages or so after Claudine - the secretive, sultry representative of the economist mafia who inducts Perkins into their world - very, very explicitly tells him that by accepting this assignment he is being inducted into an extremely, unreservedly evil cabal. The strain experienced by people who are not fundamentally evil and yet have somehow stumbled into doing fundamentally evil things has the potential to be fascinating, but it would require a more gifted and honest writer to examine properly.

The corporatocracy’s natural response to a book like this, beyond carrying on with what they were doing and waiting for it to blow over, is to simply deny that any of it is true. It has been pointed out elsewhere that whilst Perkins claims to have been recruited into the machine via the NSA, the NSA is a purely cryptographic organization that deals in code-breaking and has no direct interest in any of the activities described in the book. The existence of previously-mentioned mystery sexpot Claudine has been flatly denied by those who are meant to have sent her. Of course, the trusting reader’s natural response is “well you would say that, wouldn’t you?” And indeed, even if it turned out that “Claudine” was actually just a metaphor for the seductive nature of the orientation program at Chas T. Main, it would not make me all that much less inclined to believe the rest of the book’s claims.

I am not sad that I read Confessions of an Economic Hitman. I enjoyed the final quarter or so, which is not-coincidentally the point at which John Perkins starts writing purely about world events and stops writing about John Perkins. He points out that private entities can do the government’s dirty work, and if they are discovered they will just be chalked up to normal, healthy corporate greed. During his first engagement in Indonesia he expresses doubts about defending his 25-year forecasts in front of the Indonesian government until it is pointed out to him that “your guess is as good as theirs. Confidence is everything.” The government has already lost by conceding the legitimacy of the very concept of a 25-year forecast, resulting in a battle of wills that they cannot win. There is also something amusingly upside-down in the secret, underhanded deals Perkins made with Omar Torrijos, Panamanian leader during the seventies, to clandestinely and against all orders actually evaluate the potential of Panama’s economy in a fair manner.

Whilst I would still unenthusiastically recommend the book, this is in no small part because it is easy to read, not too long, and your local second-hand book shop could probably use the seven dollars. Its promise is to give a first-hand account of events that many of us already suspect are happening. However, whilst these sections are interesting as a way to indulge your armchair psychologist (see all of the above), they are simply too fraught with the author’s neuroses to take too seriously. I don’t believe that he is trying to mislead us about the terrible nature of the world as he saw it. I just think that he wants us to think he is cool.