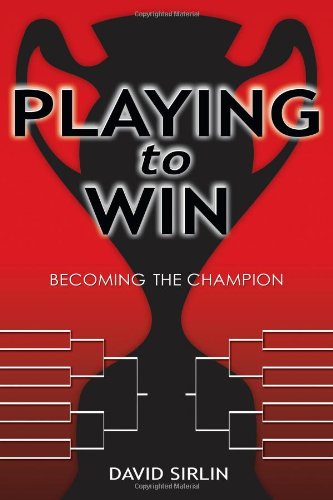 Playing to Win is a no-nonsense guide to how the best video-game players in the world become so good, and why the worst video-game players in the world are incapable of improving. This is a more mainstream subject than you might assume. There are many common elements in the development and nurturing of an all-consuming obsession in any competitive discipline, whether it be Ice Hockey or Streetfighter. When David Sirlin describes how and why he practices maneuvering his VirtuaFighter character to single-pixel precision, he is also describing many of the exact same motivations and mindsets that got Tiger Woods, Wayne Rooney and LeBron James to where they are today. Except with joysticks instead of golf clubs and video arcades instead of Madison Square Gardens.

Playing to Win is the book that Roger Federer would write if he wasn’t already richer than God and didn’t wear tracksuits embroidered with his own initials onto them.

I think I would really like David Sirlin. He is clearly completely obsessed with winning at video games, and it is clearly one of the most important things in his life. Nonetheless, he is very aware that video games are not Important. In itself, this is not particularly remarkable; given prevailing (and mistaken) public opinion about the merits of video games, it would be hard not to have this thought at least lurking in the back of your mind as you wind down after another 12-hour practice session. What makes Sirlin so appealing is that whilst he openly recognises that video games do not have a great reputation in society right now and that being good at them is not Important, he continues to talk about his experiences and relationship with gaming with (endearingly caveated and qualified) emotion and sincerity.

This is most clearly seen in one of the final chapters, where he offers his thoughts on the role of the truly elite players in a community.

Recognize that you have power, even if it is over the small group of people in this world who play your game.

Like any world, competitive gaming is not short of its fair share of narcissistic delusionals, indisputably drunk on self-importance and Gatorade. But Sirlin recognises and firmly points out that anyone with the platform and ability to influence even a small group of people still has “power”, for a given value of “power”, and that with mild-but-non-zero power comes mild-but-non-zero responsibility. This recognition that gaming is not the most important thing in the world, but neither is it the least, is an ever-present and incredibly sensible backdrop to everything else in the book.

Against all the odds, Playing to Win is the kind of book that compels you to read it several times, write pages of notes after each reading and scribble all over it in as many different colours of pen as you own. It contains enough memorable concepts to fill, like, an entire book. But my two favourites are “The Scrub” and “Yomi”.

In common parlance, “a scrub” is anyone who is just not very good at something. Playing to Win refines this definition to a specific kind of player who is both bad, but also systematically incapable of ever recognising why they are so bad.

A scrub does not really know why he is playing the game. This leads him to construct “an intricate construct of fictitious rules that prevents him from ever truly competing.” X tactic is ‘cheap’, Y strategy is ‘boring’, Z move is ‘really cool’. None of these have any impact on whether or not you win. As Sirlin recognises on page 1, playing “for fun” is an entirely legitimate thing to do, but it is orthogonal to the business of actually winning. A lack of clarity around his motivations can lead the scrub to believe they are playing to win, but actually playing for some amorphous, undefined cross between winning and obeying their own, personal set of fabricated rules.

Sirlin observes that scrubs usually try to solve their problems by trying to bend the world to match their rules, rather than bending their rules to match the world. If a scrub believes a particular move to be “cheap” and therefore outlawed by her internal rulebook, she will moan that it should be banned from the actual game too. The alternative approach of examining how to counter the move and the hidden depths that its existence creates crosses her mind, but is quickly rejected.

Since other players will invariably ignore the scrubs rules, the rulebook has to manifest itself as some kind of secondary “Code of Honour”. In the scrub’s mind, in order for him to lose he must not only be beaten according to the actual rules of the game, but by someone who also obeys their Code of Honour. This opens a Pandora’s Box of new excuses for losing, none of which remotely interest The Game. The Game only cares about who still has intestines at the end of the round. As Sirlin points out, “the rules of the game itself dictate which moves he can and cannot do, so the Code of Honour is superfluous and counterproductive toward winning.”

With only a moderate level of hyperbole, I find this hauntingly applicable to pretty much everything in my and everybody else’s entire life. Your rulebooks are rarely written to help you achieve what you believe to be your goals. You may earnestly believe that you want to get a promotion/learn Spanish/pick up more members of your preferred sex(es). You may believe that your actions are thoroughly aligned with these goals. And yet you will still be completely mystified as you consistently fail to achieve any of them, whilst everyone around you seems to be getting promoted/ordering burritos in Spanish/fighting off suitors with a big spiky stick. You soon see why - they are playing politics/staying in every night and studying/going out every night to trawl for booty. These aren’t things you’re prepared to do - they violate your Code of Honour.

If you hear yourself saying this, be careful. You might just be a scrub.

Admittedly, in real life your goals are less well-defined and much more malleable. As Sirlin points out, “games are sharply defined by rules; life is not.” There’s nothing stopping you redefining your life goals to “learn Spanish whilst still doing everything else that I usually do” or “pick up more members of my preferred sex(es) without putting in any effort”. And you’ll almost definitely be happier, or at least less inconsistent once you do so. You’ll be able to reason honestly about what you want to do and what you’re scared of, and which trade-offs you’re willing to make and what ones you want to consciously avoid.

In order to go much further, we would have to define what it is you “really want” and how to separate pragmatism and rational choice from unhelpful fear. But people seem to have a reasonable intuition of which is which; I find that the difference usually becomes clear when I imagine what my reaction would be if I was listening to someone else explain my choices and rationales. It’s easy to fool yourself, but not so easy to fool other people. Even when the other person is your imaginary hypothetical clone.

“Yomi” is a Japanese word that means “knowing the mind of the opponent”. Sirlin’s clearly strained attempts to describe its intangible but pivotal role in winning at video games is a large part of what makes me so convinced that the concepts described in Playing to Win must apply almost directly to most other elite sports too.

It can be relatively easy, or at least transparent, to reason about complex strategy. If I have a really amazing punch, you will know that I am always going to do it and so perform your block that nullifies it completely. But if I know that you’re going to block my punch, I’ll do my kick that will break through your block. But then if you know I’m going to kick, you’ll do YOUR kick that is slightly quicker than my kick. But if I know you’re actually going to do your kick, I’ll just go back to doing the punch that I wanted to do in the first place. We can draw a payoff matrix, compute the Nash Equilibria, and then we know that I should punch 68% of the time and kick the other 32% of the time.

Perhaps I then consciously notice some of you tendencies. Perhaps when you’re on the defensive you become much more likely than usual to block, and I can exploit this by increasing my proportion of kicks. When asked “why did you start kicking so much?” I can explain why, and other players can replicate this same strategy against you.

However, at higher levels of play this accountability often appears to break down. I find it hard to believe even elite sportspeople when they say they “just knew” what their opponent was about to do and how they should react. I assume it’s a product of sportspeople not knowing enough about confirmation bias and conveniently forgetting about all the other times they “just knew” and got comprehensively stomped into the ground. Of course, this belief is based on no evidence, beyond the facts that I personally never “just know” what my opponent is about to do and that any skills that I don’t have must be fictional and made-up.

However, provably intelligent, articulate and sceptical David Sirlin both firmly attests to the existence of “yomi”, or “just knowing” what your opponent is going to do, and has a very hard time elucidating what this actually means and feels like. This gives me reason to reconsider. In one story, he describes “the Japanese Thumb Game”, a simple guessing game of what should be pure luck. I can clearly imagine playing such a game and immediately dismissing it as trivial, skill-less, and therefore not caring whether I win or lose. However, Sirlin reports that “in gatherings of fighting game players, the VirtuaFighter [a game that requires particularly high yomi abilities] players always win this game.” I can furthermore imagine slowly realising that I am getting systematically beaten, the mounting frustration inside of me as I try and work out what simple strategy I have missed, and the dejection and self-doubt that this gives way to as I fail to find it and realise that my opponents simply have the ability to see into my soul.

“Yomi is an inexplicable, unseen force, but it is very real and possessed by the very best of all players.”

There are many other features of the book that are worth a detailed analysis. Some of my favourites:

Playing to Win can be read as a collection of curiosities, an explanation of why you’re never going to beat your sister at Mario Kart, or a guidebook for how you can and will become a professional gamer. In order to exist, it required someone with the intelligence, humbleness and lucid writing style of David Sirlin to become completely obsessed with winning at something, get to the very highest echelon of that thing, and still have the interest and ability to discern and write about the underlying principles behind how they got there. I don’t believe that such a nuanced and un-crowd-pleasing analysis was ever likely to come from mainstream sport, and given the stereotypical cultural crossovers between science and computer games, it is perhaps not entirely surprising that it came from competitive video games. I’m glad that it did.

Buy Playing to Win direct from the author or read it for free here.