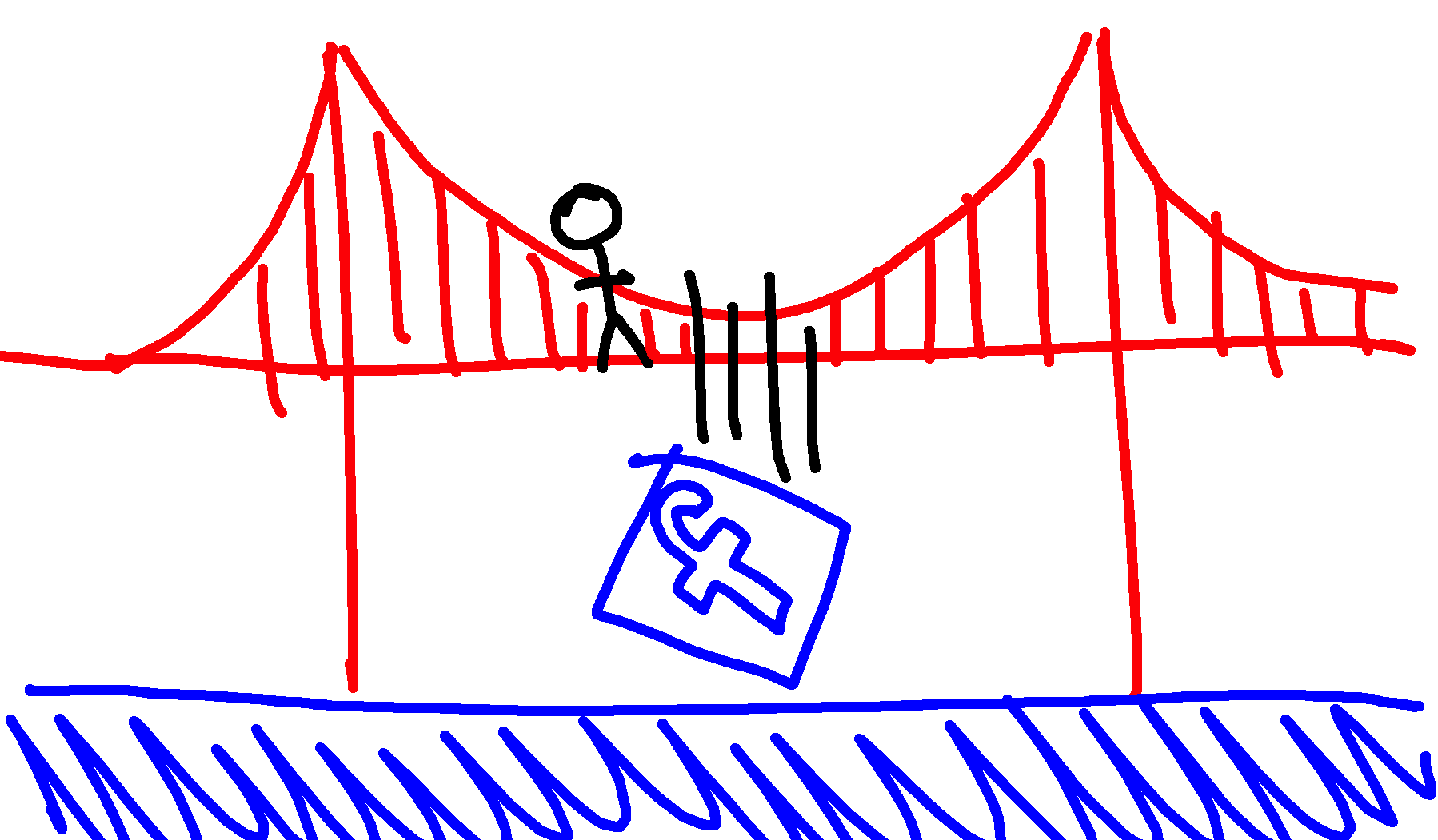 A few weeks ago Facebook announced several changes to WhatsApp’s privacy policy and gave users a few weeks to decide whether to accept them or to get the hell off their platform. The changes sounded outrageous, and I was duly outraged.

I now believe, perhaps foolishly, that these particular changes were probably not as awful as the articles made them sound. Facebook have since clarified some aspects of their plans and pointed out that other aspects have actually already been policy for years. But the changes were both communicated poorly and reported on effectively, and “don’t worry, everything’s already terrible” isn’t a good defence. Facebook’s lack of public trust and lousy record on privacy must make it several notches harder for their PR team to quietly disclose even benign policy changes without setting off an avalanche of derision.

Even though I don’t think that these changes made anything worse, they still brought my and many other people’s attention to lines in the WhatsApp privacy policy like:

Facebook and the other companies in the Facebook family also may use information from us to improve your experiences within their services such as making product suggestions (for example, of friends or connections, or of interesting content) and showing relevant offers and ads.

My mistrust roused, I started thinking about whether I could do without Facebook. It turned out I could.

I understand that most egregious privacy abuses are perpetrated by companies I’ve never heard of. I understand that most of my personal data is already the property of hundreds of other companies with even worse controls than Facebook. I know that deleting my Facebook account won’t bring my data back home, and that if I wanted to truly regain my privacy then I’d have to change my name and address and date of birth and hobbies and socio-economic background. I understand that no one inside Facebook has to care about mass account deletions until they reach their ninth digit, and that even scandals like this probably barely scrape seven digits at most. I understand that deleting a Facebook account is an ineffectual gesture, especially since I’m currently too tied into WhatsApp to delete that account too. But I still think it’s a worthwhile one.

Is that a roundabout way of describing a vaccine?

Deleting my Facebook account was surprisingly easy because I didn’t get any significant value from it anymore. If you’re my age (early thirties) and anything like me then you have a couple of legacy chats open on Facebook Messenger and you use the newsfeed in moments of weakness to stay up to date with five people who you spoke to twice at university and seven people who you’re quite sure you’ve never met. There’s nothing wrong with these people and I’m glad that they have nice holidays and strong positions on Brexit, but knowing this doesn’t make either of our lives better.

I migrated the few outstanding chats I had to Signal or SMS or email. I reluctantly accepted WhatsApp as a fallback if absolutely necessary, since even if you stay within the Facebook Inc. empire it’s probably better to shrink your footprint. Even the people who I expected to call me a tin-foil-hatted-dweeb were sympathetic to my motivations. No one actively wanted to stay on Facebook and very few people I co-ordinated with posted anything publicly anymore. We were all just victims of those sad network effects who wanted to be able to talk with our friends. I posted about my plans a few weeks before I hit the button, and several people who I used to to like a lot but haven’t spoken to for years got in touch to swap off-Facebook contact details. I’m hopeful that we’ll be friends again and that deleting Facebook has brought us closer than using it ever did. If all you want is a messaging platform then you have a million alternatives, and some of them aren’t even wholly-owned Facebook subsidiaries.

I do like that Facebook is a global contact directory from the past. In theory it allows you to stay in loose touch with people who you once liked, and maybe even occasionally jolts you into getting back in contact with them. Maybe this really was Facebook’s honest-to-god mission at one point, in between the original one to rate hotties at Harvard and the current one to hoover up the world’s personal data and not give it back.

But I looked through my message history and I’ve only ever used Facebook to get in touch with old acquaintances once or twice. Even without Facebook, email addresses usually aren’t hard to find. I seem to be the most internet-active Robert Heaton in the world so it’s easy to Google for my email address, although I do worry for Jim Smith. Last year my primary school teacher from when I was 7 got in touch over Facebook to see how I was doing; we exchanged a few messages. That was pleasant, but not worth the price of admission.

Even up until last week I did still get a modicum of use from Facebook Marketplace, the occasional Group, and maybe 3 photos and 1 event per year. It will be inconvenient if my son’s future nursery uses Facebook to organize their events, but the more of us there are without Facebook accounts, the less able they will be to do this. At some point in the last decade or so it became reasonable to act as though everyone had a Facebook account, and to argue that if you didn’t have one then that was your problem. I like to think that we’re tipping back the other way, even though Facebook’s market cap suggests otherwise.

All of this said, if Facebook ever make anything useful and irreplaceable then I can’t rule out the possibility that I’ll try to make a fake account or ask Gaby if I can borrow hers if she still has it.

I started university in 2006. I had only vaguely heard of Facebook and didn’t have an account, but as soon as I arrived the second-years advised me that I had to create one immediately or I would have lunch and die alone. They were right; at university, Facebook was life. I assume that things aren’t like that anymore. I liked the way that Facebook allowed me to feel as though I had quickly made connections with hundreds of people at a fragile time in my life. I’m not sure this was beneficial to my mental health. Adding someone on Facebook felt much less awkward than asking for their number, and I made my first serious, multi-year girlfriend after a prolonged campaign of Facebook message banter. While writing this post I contemplated going back and re-reading our thread, but I couldn’t bring myself to. I want to remember the general feeling of being young, but not too many of the specific things I did or wrote that must have seemed funny or edgy at the time. I downloaded my Facebook data dump before hitting the delete button just in case I ever find myself old and bored and wanting to reflect on how vibrant and INCREDIBLY WACKYYYYYYY I used to be.

After university my Facebook usage gradually shrank to near-nothing. I collected the bounties of likes from posting photos of my wedding and my first child, but I doubt that the payoff is as big for your second child or your second wedding. I also put my blog posts on Facebook, and I’d usually get a handful of likes and friendly messages for each one. For my last few posts I got nothing, so either Facebook identified me as a spambot or the five people I spoke to twice at university and seven people who I have literally never met didn’t care for the direction my writing had taken.

This must be a difficult time inside Facebook HQ. On the other hand, no one ever says anything nice about Facebook anymore beyond “React has gone a long way to uniting a fragmented JavaScript ecosystem”, so it’s probably always a difficult time inside Facebook HQ. I imagine that the morale is low but the stock price is high and the RSUs are unvested so management doesn’t have to worry too much. My own employer gets attacked on Twitter with what feels like increasing frequency, so - even though I do think that we’re making the world a better place on balance, which is the nicest thing you’ll get me to say about anything - I won’t throw too many stones. I understand that at the end of the day most of us are just employees trying to optimize our metrics and get paid a lot and hope that markets turn this into something good for society. Nonetheless, I do find it fascinating to imagine the kickoff meetings and daily standups for the projects with success criteria like “man-in-the-middle children’s encrypted iPhone traffic” and “require a Facebook account to use the Occulus Rift for no good reason”. I’ve never been asked to do anything particularly grimy at work, but if I was then I’d probably try to change teams and I like to think that if that wasn’t allowed then I’d leave immediately, without delay, as soon as I’d finished vesting.

If you still find Facebook useful and the tradeoffs worth it then good luck to you. But my recent conversations suggest that many people don’t. Maybe you think that Facebook doesn’t censor bad people enough. Maybe you think they censor them too much. Maybe you want back the minutes or hours per day that you spend scrolling through your newsfeed. Maybe you don’t like who you are on Facebook, or who other people are. Maybe you’ve had enough of Facebook’s data-purloining and anti-privacy shenanigans. Or maybe you don’t have any particularly strong feelings either way but your friends don’t use Facebook any more and you’re up for spending a few minutes cleaning up your digital footprint.

If so, I recommend it.