It’s yet another night.

Your good friend, Kate Kateberry, is having the most harrowing nightmares of her life. They have made her terrified of even setting foot in the bedroom end of her studio apartment, and have forced her to decamp to the living room. This morning, after hours of futile tossing and turning, Kate finally falls into a shallow, restless sleep. 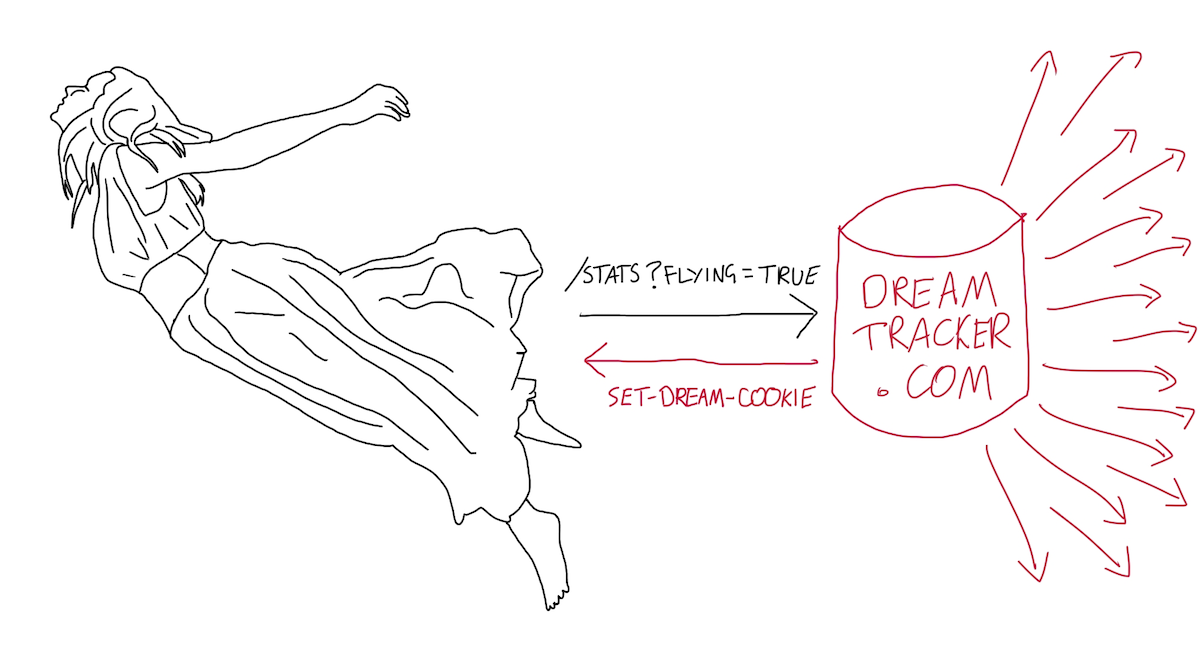 She lands in the same dream as yesterday’s night, and the night before that. She’s in a vast museum. It’s bright, ugly and bursting with visitors. Exhibits jostle for position in the most prominent, high traffic locations. Here’s one about thirteen unbelievable causes of modern day ennui. Here’s one about the ten least controversial episodes of Friends. No one in the museum sees or hears each other. Below each exhibit is a void and a megaphone. Angry patrons seize the megaphones and scream about their hatred of the exhibit, the museum or, most often, themselves. The void thanks them for their contribution.

Kate dislikes the museum. It’s trite and fatuous, and she can’t remember how she got there. But there’s still something oddly compelling about it, and she finds it very hard to look away. Out of curiosity, she walks over to an exhibit that promises to tell her which Spice Girl she is (it’s a trick question - she is not actually a member of the Spice Girls).

A robot the size of a can of coke floats down from the ceiling. “Hello Kate!” it says. “I heard that you like power drills! Would you like to buy this power drill?” Kate is perturbed - she does indeed like power drills, but who told the robot? “No, please just leave me alone,” she says, tired and grumpy even inside her dream. The robot flashes its lights to indicate understanding. “I’m sorry! I didn’t realize!” It pauses. “Would you like to buy this knock-off Harry Potter figurine?”

Kate’s perturbation deepens. She had been looking for off-brand Hermionish dolls only yesterday. “No, I don’t want any of your stuff.” “Are you sure? We really think you do, and we know an awful lot about you.” Pause. “What about these maximum strength sleeping pills?” “Jesus Christ no, just leave me alone, forget about me!”

“It’s quite alright Kate, this personalized advertising service is free of charge and no bother at all!” “I don’t think you’re listening to what I’m saying.” “I’m hearing you loud and clear, don’t you worry. We’re all working on making your experience even more bespoke and consistent as we speak.” Kate deletes her dream cookies and the museum flickers.

The robot reboots. “Hello! What’s your name?” “Thanks but I’m really just here for the Spice Girls quiz.” “Great! Here, have a tracking cookie! Complementary and on the house!” “Absolutely not.” “If you don’t take it then many of your favorite news outlets will go out of business!” “Oh god damn it, go on then.” “Kate! Great to see you again! Would you like to finally buy that power drill?” Kate screams and her alarm goes off.

Kate is in her therapist’s office. She has just finished describing her latest nightmares. She notes with irritation that it took eight minutes or around thirty dollars to get through them. “What do you think Malcolm? What does it all mean?”

Malcolm Malcolmson, psychotherapist, takes a long chew of the left arm of his glasses. “A lot of my patients have been having similar dreams lately,” he says. “But you shouldn’t be concerned. Just keep deleting the tracking cookies if they bother you. The harm that they do to you is real, but it’s also nebulous and incompletely understood. If deleting your cookies doesn’t help then I can also prescribe an ad blocker that will prevent them from even developing in the first place. It’s perfectly safe, although it will cause many of your favorite news outlets to go out of business.”

It’s the next night. Kate gets home at two am from a particularly ghoulish day at work and is blackout drunk within the hour. She finds herself in the same museum, with the same robot, talking about the same power drill. The robot looks somehow more powerful than the day before. When its aggressive blathering becomes too much, Kate deletes her dream cookies again. The museum flickers and the robot reboots, but it barely misses a beat.

“Hi Kate! We’ve only got one unlicensed Harry Potter figurine left, you should buy it!” “How is this possible?” says Kate, backing away. “How do you still know who I am?” “Of course I know who you are Kate! And a good thing too, otherwise you might have missed out on this Wrong Weasely action figure!” Kate screams, but her alarm isn’t scheduled to go off for another three hours. She turns and runs, but the robot floats after her. “Season 5 of Lost on DVD!” Kate spots a fire escape. “Discount psychotherapists specializing in technology-induced malaise!” She dives through the exit, but lands awkwardly and cracks her skull on the floor. She is knocked out dream cold.

There is no Inception.

Kate regains dream consciousness. She slowly looks around. The robot that had been pursuing her is nowhere to be seen. She’s in another museum. It’s much smaller than the first, but rather more tastefully decorated. Nothing flashes, and nothing is neon. Just nice, calming pastels. She spots a longform exhibit about the opioid crisis. As she walks over to it, another robot drifts down from the ceiling. It’s clunkier and more awkward than the first, about the size of a wine bottle. “Hello! What’s your name? What kind of stuff do you like? Would you like a tracking cookie? Please?” Kate breathes a sigh of relief and tells it to go float into a lake. It’s good to be somewhere where nobody knows your preferences.

As she wakes up, images of the chase in the first museum flash before her blurry eyes. She has to know what happened back there.

“I deleted my cookies Malcolm! And the robot still knew who I was! How did it do that?”

Malcolm Malcolmson takes another long chew of the left arm of his glasses. A big chunk breaks off in his mouth. He pretends to cough and hides the shards of glasses down the side of his leather armchair. “It must be using an Evercookie.”

“An Evercookie is a piece of data replicated in as many of your browser’s storage mechanisms and caches as it can worm its way into. The Evercookie stores your tracking ID in a normal cookie, a flash cookie, HTML5’s session, local and global storage, and many other places. If you clear any of these stores, the Evercookie uses the information in the other stores to regenerate itself.”

“…the Evercookie simply retrieved your tracking ID from one of the tens of other places it had stored it instead. Did you check your dream cookies before you left the museum?”

“Next time, follow the instructions on this pamphlet. I strongly suspect you will see that your cookie was respawned.”

Kate snatches the pamphlet without looking at it and slumps back onto the couch. Malcolm leans forward reassuringly.

“There are some preliminary trials that suggest that using Safari in private browsing mode can be an effective treatment.”

“Come on Malcolm, the only people who use Safari are the ones who don’t know how to use it to download a better browser.”

“I know it’s hard, but don’t give up. You can still live a normal life.”

When Kate gets home she procrastinates on the internet in the bath. She falls asleep early, around midnight, in front of the final episode of Season 4 of Lost.

There’s wickedness for the resting.

As always, the floating spam robot in the first museum recognizes her instantly. She knows that she can’t outrun it, but she does her best to ignore it. She keeps her eyes to the floor, blocking out the spam robot, and focuses on finding the exit. She walks straight through the ethereal forms of thousands of other museum goers, but none of them notice. She makes it safely to the second, more tasteful museum, and slams the door behind her.

She walks over to the longform exhibit about the opioid crisis. The second museum’s robot glides up behind her. “Hello Kate! My friends told me that you like power drills! Would you like to buy this power drill?” Kate screams. It can’t be. How does this museum suddenly know who she is too? She has only been here once before, and she never told it anything about herself or her interest in DIY. She tries deleting her cookies. “How about this knock-off Harry Potter figurine? Genuine Fakeo Malfoy!” Nothing left to do but run.

Kate flees to a third museum. “Hello Kate!” She keeps running. All these museums have near identical layouts; she quickly learns how to get in and out in the shortest amount of time possible. She barely has time to register what’s in them. She flees through museums about serious news, fluffy news, serious news about fluffy creatures, forums about video games, blogs about cooking, forums about blogs. In each one: “Hello Kate!” “Would you like this power drill Kate?” “Would you like this knock-off Harry Potter figurine Kate?”

Suddenly “Hello! What’s your name?” She stops dead, panting. “You don’t know who I am?” “You think I should? You some kind of big shot or something?” “No” says Kate, smiling, “no I’m not.” The museum flickers. “Oh Kate, it’s you! Would you like-“ Kate screams and wakes up. It’s three am.

“I can’t take this any more Malcolm. What’s happening to me? How does everyone know who I am?”

Malcolm Malcolmson has started wearing contact lenses. He gnaws on the end of his pen. “It’s impossible to say for sure without scanning the insides of the companies that are tracking you. It could be cookie syncing. Perhaps an identity graph. Or maybe browser fingerprinting; your IP address; or just spooky chance.”

“What can I do Malcolm? Tell me what to do!”

“You could starting using a VPN. Disposable email addresses are worth trying. I’ve seen the Tor browser help some people like you. You could stop using Facebook; you could start giving your favorite news organizations some money to reduce their dependence on advertising. You could move to Europe - the weather and the GDPR are lovely at this time of year.”

“What will happen if I don’t?”

“I don’t know. None of this tracking is good for you, obviously. But it’s hard to say whether it’s closer to asbestos or to a non-organic desert. If you’re willing to put in the time, effort and money to shrink your online footprint then that’s great and you’ll be safer for it. But it’s not like you’re going to drop dead tomorrow if you don’t.”

“Thanks Malcolm. Sort of.”

Kate leaves Malcolm’s office. She swears off of online retail for good. She buys some over-the-counter stress medication from a major national pharmacy. The pharmacy sells her loyalty card data to a large online data broker. The system continues to work.