Gaby had originally planned to be as pushy a parent as possible. However, now that she has Oscar she just wants him to be safe and happy and doesn’t care if he’s good or bad at anything. I mostly agree, but I do still hope that he has the good grace to show at least some flair for Magic: The Gathering or Rocket League.

Of course Oscar can ultimately do anything that he wants as far as I’m concerned, so long as he’s not a poet or a social conservative. He can be a right-wing low-tax ultra-free-marketeer if he must, but I will be pretty bummed out if he ever starts talking about the importance of defending traditional family values. I suppose that if he really, really likes writing free verse then I won’t stand in his way, but I will be cutting out all the poetry from the New Yorker and replacing it with adverts for violent movies. 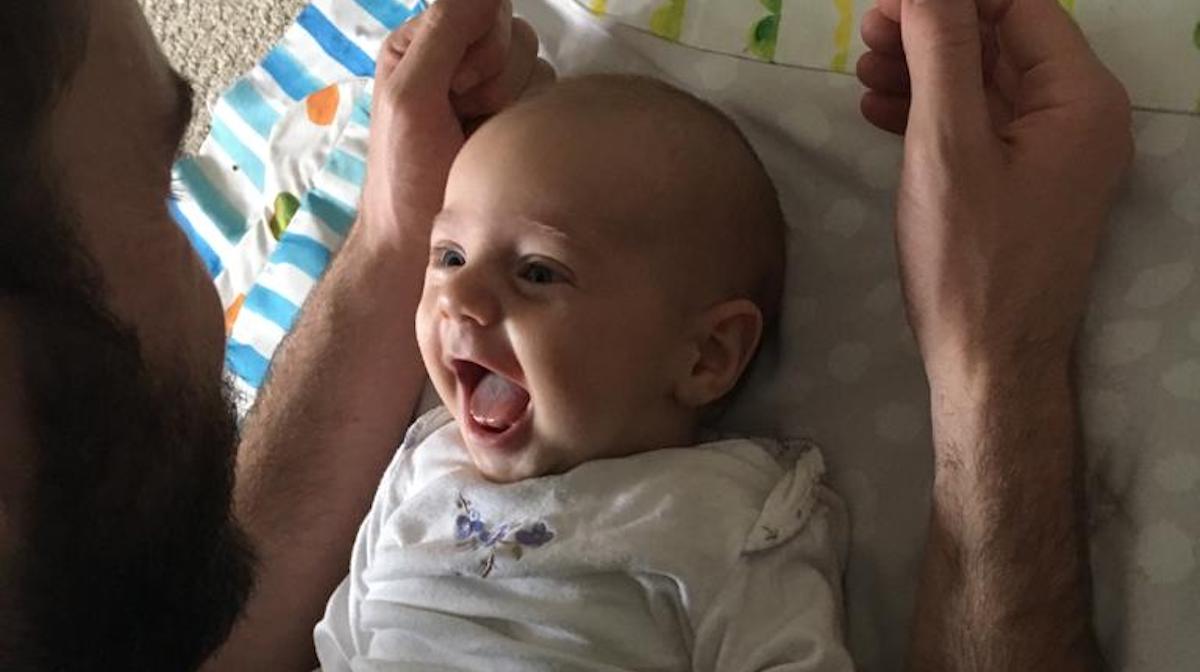 There was no single magical moment at which he unambiguously gifted us his first grin. Rather, on one indistinguishable day, the dial tipped and we decided that the grimace on his face was fifty-one percent likely to be a smile, and only forty-nine percent a fart. There was much rejoicing.

Oscar has started batting at his dangly toys with his hands. Or perhaps his random flailings have increased in frequency and his arms have gotten longer. There’s a metaphor for life in there somewhere.

Oscar has a UK passport. The process of acquiring it was simultaneously quick and ghoulishly difficult and I don’t want to talk about it. The document itself is all very British and regal, apart from the line where it says that Oscar was born in San Francisco, USA. I think that this will be a neat little factoid which the little guy can use to impress the ladies or the men or both or neither when he’s older, although I can’t immediately articulate how being born in Madison, Wisconsin would have made my own teenage years any less frustrating.

I’ve been enjoying telling improvised stories to Oscar. The protagonist is whichever inanimate object is closest to hand, and the adventure opens with everything and everyone in perfect harmony. Then the protagonist experiences a setback. This can either be due to an antagonist or to circumstance. Maybe Alice the late-night-drum-playing-alpaca gets shouted at by Boris the other-alpaca, or Ursula the USB cable can’t reach the olive oil at Safeway because she’s only 16 inches tall. After a brief moment of tension a passer-by lends a hand or the combatants resolve their differences, and everything ends happily. Oscar learns valuable lessons about the value of compromise and narrative structure, and I get to insert liberal propaganda about structural societal imbalances and the complete irrelevance of traditional family values.

Maybe if Gaby and I get promoted a few more times then our fourth child’s stories will be all about the importance of incentives and a twenty-eight percent top marginal rate.

My and Gaby’s employer (we work at the same company) gives us each 4 months parental leave. This makes Oscar a very expensive baby for them. Fortunately Stripe raised $245MM of funding at the end of last year and the snacks in the office just got upgraded, so I don’t think Oscar is about to put the firm out of business. But it does make me see why many equality laws exclude small companies. Social justice can get pricey, and I imagine that it’s easiest to fund it from a stable and healthy profit base, or whatever the Silicon Valley equivalent is.

Gaby and I each think that the other is doing most of the work. This could either suggest that our division of labor is very efficient, or that it is very inefficient. In reality it’s somewhere in between, and Gaby is simply wrong if she thinks that the majority falls on me. I’m already back at work, because I’m waiting until next year to take my parental leave. This means that Gaby has Oscar all day, every weekday. The only exception is when I’m working from home and can strap him to me while I work for a few of his naps.

Thinking in this way makes me anxious. Why do “you” get a say? We should figure out what works for us, you figure out what works for you, and no one has to question anyone else’s modern parent credentials. And in any case, measurements of time-spent-with-baby can never tell the whole story, and at worst tell a completely corrupted one. Are you trying to optimize for fairness? Happiness? Productivity? The mushy, undefined aggregate of all of these goals and more that real people actually use in order to justify their gut?

Time spent with your child is sublime and priceless, but it still has diminishing marginal returns.

Even if I took Oscar for 50% of the day (which I don’t), in truth Gaby retains baseline responsibility for him. Sure I take him off her hands every now and then, but it rarely feels like a true passing of the baton. I think this is in part an inevitable consequence of breastfeeding. During the day Gaby is on a 3 hour leash, at absolute most. We do try bottle-feeding too. But it’s harder work, Oscar doesn’t like it as much, and Gaby has to remember to pump, which is work in itself.

Rather than fiddle with a day-to-day setup that mostly seems to be functioning well, we’re instead working on better distributing responsibilities for broader baby decisions. Our other household duties usually get apportioned organically. I manage taxes, finances, and immigration; Gaby manages food, cleaning, and dentist appointments. Tasks are distributed tacitly according to skill and interest, with a nod to stereotypical gender roles.

We think that Oscar should be different. Gaby says that she doesn’t care about the distribution of time-spent-with-baby, so long as we’re all happy and in love with each other. However, she does care about having a conscious and equitable distribution of baby-decision-making. At the moment, most Oscar-related concerns by default fall through to her. This is partially logical, since she is off work and spends the most time with Oscar. But I also think that, unless we are deliberate about it, this time next year she’ll still be the one who has to work out when we’re meant to start taking him to the dentist.

We’re not entirely sure how best to distribute this work in a way that sticks, but we think that a Parenting Vision Google Doc and some Asana projects are a decent place to start. This all goes to show that “equal parenting” can mean many different things, and that it almost certainly isn’t even the right thing to aim for. Perhaps all you can hope for is “happiness”.

That said, I’d still find it easier to feel comfortable if the time-spent-with-baby numbers balanced out too.

I keep assuming that Oscar will learn from all my mistakes. On reflection this is rather unlikely. Jeez, Dad sure seems to find eye-contact difficult and this diminishes his effectiveness as a communicator. I’ll be sure to work on that? Probably not.

I also keep assuming that Oscar is going to be more progressive than me. I suppose that this is likely, at least at any specific point in time, given the tendency of people’s political leanings to slide to the right as they get older and they start to think about a comfortable retirement and a second home. Perhaps the only exception might be an inflection point at which old age and the specter of impending death start to make me uncharacteristically generous, and Oscar reconsider his support for a high rate of inheritance tax.

A couple gives birth to a trio of triplets and decide to use them to run an experiment. One triplet watches TV all day. One does nothing but talk to their parents. The other spends all their time in their bedroom with the curtains drawn. Which triplet is most likely to be a serial killer?

This is of course a trick question; the answer is all of them.

Is learning foreign languages important for a child’s development? Are the yuppies next door getting one up on us with the Spanish-speaking daycare that they take Theresa to? I find foreign languages trés boring so I know the conclusion that I’m hoping for. However, I suspect that there’s no clean, objective answer either way. Sure foreign languages are “important”, but are they more important than tennis? Or the trumpet? Or a deep and abiding sense of intrinsic self-worth, separate and distinct from any party-tricks that your parents forced you to learn before you were old enough to decide what really matters to you?

Should we ever leave Oscar to amuse himself? Should we take him to baby classes? Which ones? Should we play him classical music? Should we ever leave him to cry it out? What’s the relative value of showing him how much fun reading will be once he understands words, versus showing him how much fun playing with blocks will be once he has muscles and a modicum of co-ordination? How are we meant to decide between the contradictory recommendations of parentsnet.net and dadsplosion.biz when neither of them cite their methodology and both are trying to sell us shit?

“Just read the academic studies.” Easier said than done, John Maynard Douchebag. Emily Oster, an economist, recently wrote a book called Cribsheet in which she does exactly this, and even then it feels like most of the time she concludes that there’s insufficient evidence to make a call either way and that in any case it all depends on what you value. This does at least mean that if you make a mistake then you shouldn’t feel too bad about it, although you still will if you ever find out. I’m sure that most non-obvious decisions don’t matter much and that most kids turn out OK, but I say this more out of hope than conviction. Some kids turn out more OK than others, and these are all difficult ideas to shake once you’ve got them into your head.

In my previous post about parenthood I wrote that I was pen-testing Oscar’s wi-fi enabled internet-of-things crib. You’ll be pleased to know that I discovered a small protocol-downgrade bug in the firmware, which the manufacturers patched after I told them about it. My colleagues on the Stripe security team responded with congratulations, plus mild horror that I put my child anywhere near a device that connects to the public internet, plus a list of closed-circuit alternatives.

Several people have commented that my previous posts have seemed a little flippant in places. This is partly a conscious stylistic choice, and partly a habit of a lifetime borne of a significant difficulty displaying sincere emotion or vulnerability without pretending that it’s all a big joke anyway.

Lest there be any doubt, let the record hereby show that I love my son like he was my own.

I hope that even flippancy can be poignant sometimes when seasoned with flakes of candor. 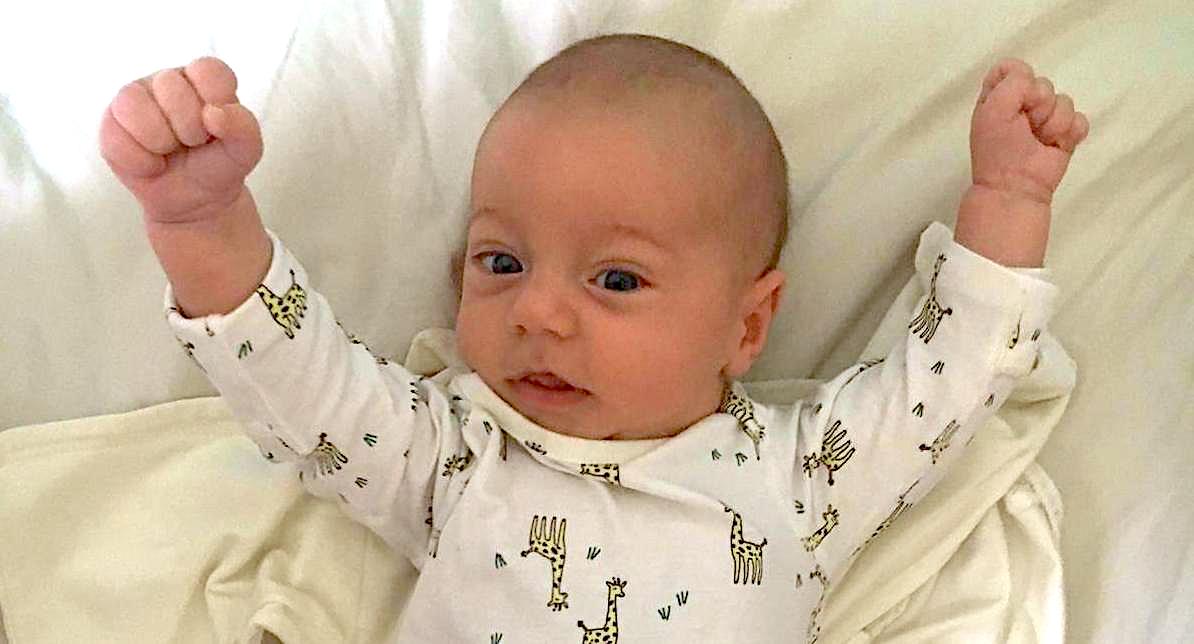