Here are 30 or so more ways to make your blog more entertaining to read and more pleasurable to write. See also: “A blogging style guide, vol 1”. 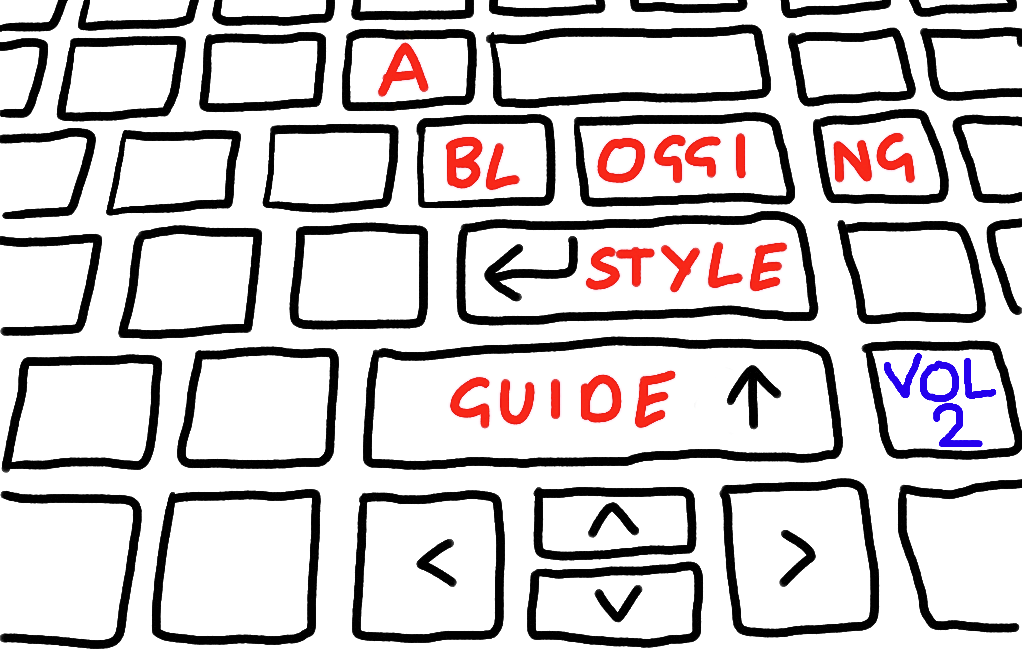 “Everyone else is doing it” is not an excuse, but it is something of a mitigating factor.

I realized that “something of” was just fearful throat-clearing, so I deleted it:

“Everyone else is doing it” is not an excuse, but it is a mitigating factor.

This sentence is tighter and punchier. Enough improvements like this add up to appreciably better prose.

I start writing a new post by spewing out notes, usually ideas and turns of phrase. I’ve probably already been thinking about the post for at least a few days, so I should already have a good backlog. When I run out of ideas I start shuffling around what I’ve got into an outline. I keep a section at the bottom of the page for ideas and phrases that I like but haven’t found a home for yet.

When I’ve got enough of an outline to start writing, I start with the introduction. I don’t actually write it, because introductions are difficult and not a fun way to ease into writing. But I do try to figure out roughly what it will say. What is the post about? What do I want the reader to think it’s about?

I often start writing for real with the section that seems like it will be the most fun. In posts about privacy violations, this is usually the part where I’m mean about the company that is stealing your data. In most other posts it’s whichever bit I’ve thought up the most jokes for. I start here in order to help me get excited about the post, and to help get the style of the post off on the right foot. Anything that starts a dirge will stay a dirge, but something that begins life with a sparkle has a chance of maintaining that sparkle throughout.

Once I’ve built up some speed I go back to the top, just after the introduction that still doesn’t exist, and start writing body paragraphs in rough order. My first draft is usually rushed, feels terrible, and exists primarily as a sentence-level outline. If there are any sentences or sections that feel too intimidating to write during this phase then I leave a TODO instead. Once I’ve finished the first draft I go back to the top, write the introduction, and start editing. Many sentences are awkward and don’t hang together, but it’s easier to polish them once I’ve got down the important information in a reasonable order.

When editing I start at the top, read the post, and make improvements as I go. Once I reach the bottom I go back to the top, read it again, and make more improvements. I stop once I get through a pass without making any improvements. Then I leave the post for a week - ideally longer - and repeat this process. Finally I send it out for feedback (see below).

Many successful bloggers do substantially less editing than me. I imagine that either my first drafts are worse than theirs, or my style is more ornamented and requires more work to be made intelligible.

When I’m finished, if I still have pleasing phrases without a home then I add them to my “leftover snippet” list. So far this list is over 1,500 items long. On review many snippets are not as good as I first thought, but I still often manage to recycle them into future writing or contextless Tweets.

Some of my favorite snippets include:

Asking for feedback from friends and family

Asking for feedback from strangers

I sometimes get unsolicited emails from kind strangers who have read my writing. I have several stock questions that I ask them:

If the email is about my Programming Projects for Advanced Beginners series, I ask a few more questions:

If you found these ideas useful then it would be surprising if you didn’t enjoy Volume 1 too.